An ongoing Project … Tambourine Bay is a multimodal work for large scale video projection and electroacoustic performance. It can be seen and heard as a window into the local weather patterns experienced in the Tambourine Bay Reserve, situated on the Lane Cove river, Sydney between the 10th and 26th of January 2012 and represents a transition or dramatic shift in the climate over a 16 day period. Additional audio and text combine with this to reflect on more severe weather patterns across the east and west coast of Australia leading up to the Australia day long weekend. 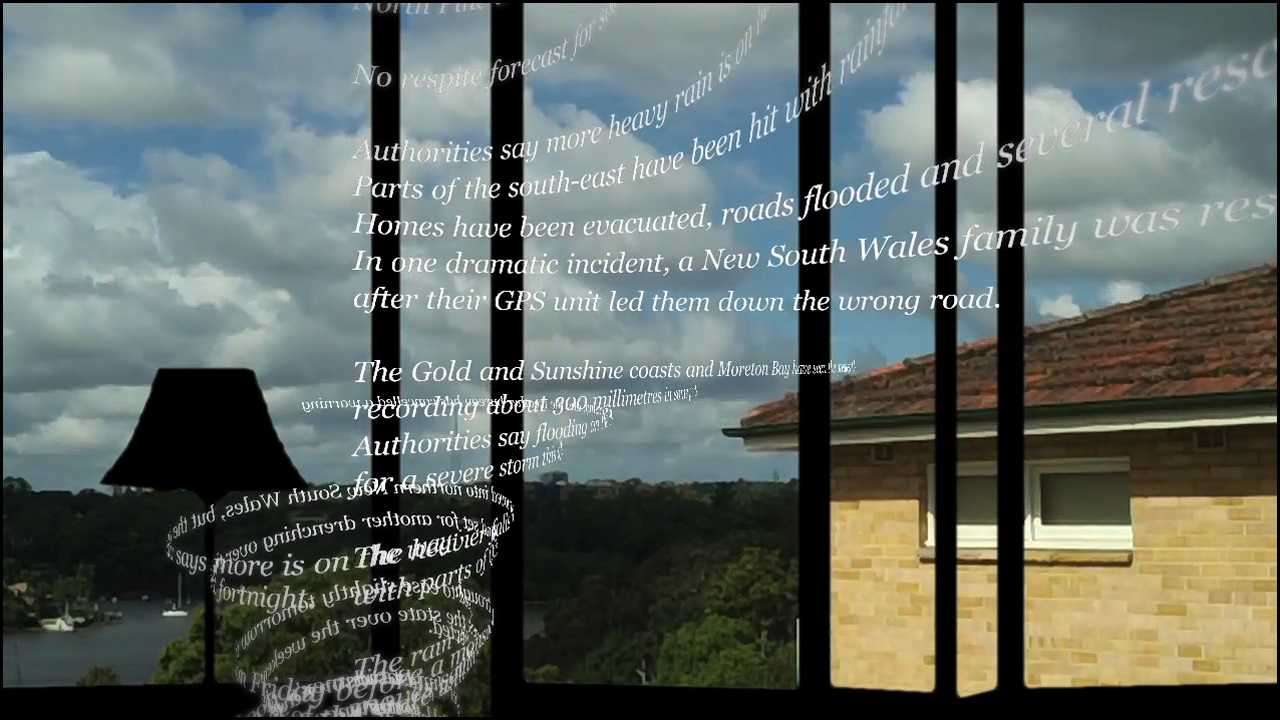 The audio visual is in three parts and is visually represented through processed urban video footage, altered in its duration, hue and perspective and situating the viewer inside an apartment room looking out over Tambourine Bay. Parts 1 & 2 of the video/performance are visually saturated in a red and orange hue intended to illustrate and highlight the unusual weather patterns experienced in this inner city suburb, the ongoing shifts in local weather patterns and what this might indicate in terms of broader climate change (see Figure 1 Video Still).

Throughout the video / performance the audience witnesses the systematic pounding of the Tambourine Bay Reserve as it is severely struck by thunder and lightning. It then transitions from late evening into an overcast midday with a forecast of further showers, storms and bush fires. The final scene is late afternoon interspersed with sunshine and heavy cloud cover and again with further predictions of wild weather.

Spiralling text created in the application Processing and adapted from the typography sketch “kinetic_type” by Zach Lieberman (Lieberman 2014) fuels the narrative of the video and performance. Using the daily weather broadcasts transcribed from ABC news radio throughout January 2012 the narrative builds and repeats itself in an upward movement passing in front of the window frames from which the video was shot. This constantly moving cyclone of text is both readable and sometimes not, providing snippets of news, which can be distinguished at random throughout.

A second layer of text also created in Processing will be projected onto a screen placed within the audience. This secondary text will be manipulated by the performers on stage in real time using long range, infrared sensors to alter and control the flow of data, including the axis, radius, motion and direction of the data (spiralling text). The secondary text will constantly change and will be sourced from real time news feeds broadcast online as weather news in the vicinity of and at the time of the performance.

It is intended that the two layers of text provide contrasting data between the shifting weather patterns over a period of time ranging anywhere from the 10th of January 2012 to the current day’s performance date, time and data. The second layer of text’s Processing sketch is still in development. A prototype sketch using a simple turn switch with an Arduino to manipulate the speed and direction of the spiralling text is in production. 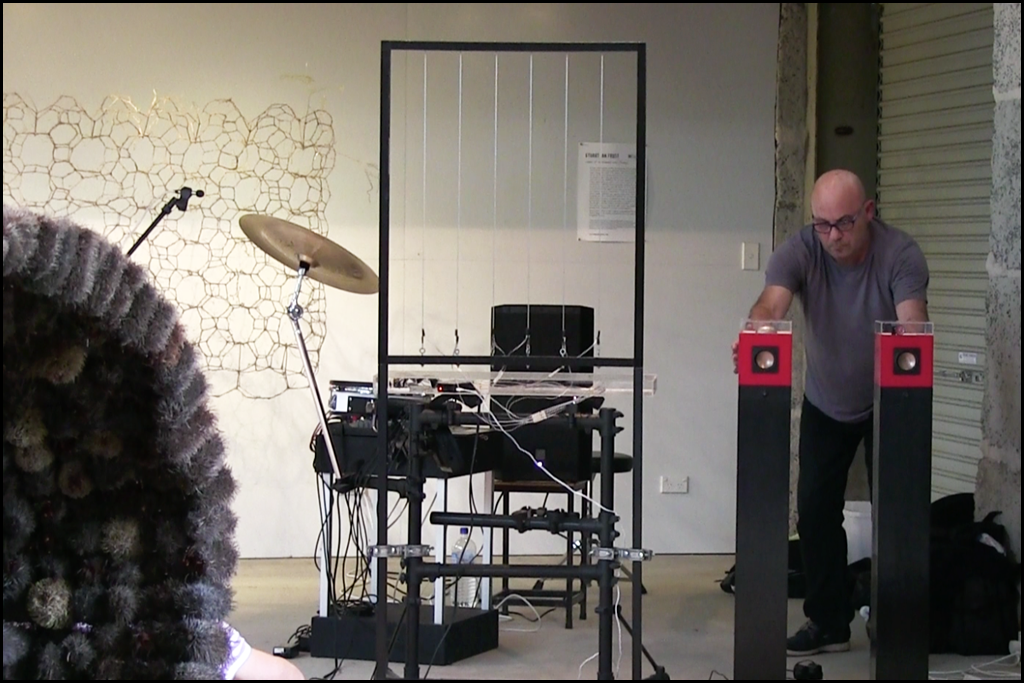 The performance soundtrack will attempt to include oral snapshots recorded by aboriginal elders, the oldest inhabitants of this Sydney location, from the Cammeraygal group of the Kuringgai Aboriginal tribe. Prior to the arrival of the First Fleet her group inhabited the area in which Lane Cove is situated. The Cammeraygal group lived on the north shore of Port Jackson and were one of the largest groups in the Sydney area. If permitted the aboriginal elders will speak and sing of their environment and reflect on this in the historical context of their Cammeraygal group and the Lane Cove river.

The original video component and soundtrack of Tambourine Bay was first programmed for exhibition at the Balance-Unbalance International Conference 2013 in Noosa, Queensland, Australia from the 31st of March to the 2nd of June 2013. The work was exhibited in the ‘Earth to Earth’ sound venue throughout the Conference proceedings. The artist would like to thank Dr Ricardo Dal Farra (Chair & Conference Convenor) and Dr Leah Barclay (Conference Co-Convenor).